PRESS RELEASE: Ambulance service failing – and set to get much, much worse 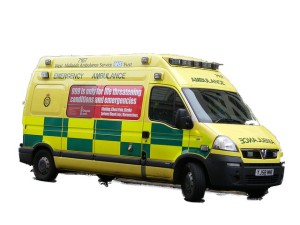 There is a national target that ‘Category A’ 999 calls – those for immediately life threatening conditions – will be responded to within 8 minutes for 75% of people. This doesn’t mean that every single person, even in the most remote areas, can expect an ambulance within 8 minutes every time – but the view of successive governments has been that 75% in 8 minutes is realistic, and that most people, most of the time, should be reached by an ambulance quickly when they’re at immediate risk of dying.

Not in Shropshire, apparently. Shropshire CCG considered a report on ambulance response times at its Board meeting on 24th September1. The Board heard that the ambulance service was still failing to meet the national target, as it has been for a long time. They dismissed increased funding of the ambulance service as ‘unaffordable within current resources’. They agreed that the solution to failing to meet a national target was to opt out of the national system and abandon the target. A revised target seems to be the one outlined by Julie Davies, Director of Strategy and Service Redesign. She said that the CCG would aim for a situation where no one would wait more than an hour for an ambulance to arrive in response to a 999 call, and this was the target discussed and agreed by the CCG Board.

Astonishingly, the CCG does not seem to have modelled the impact on patients of dropping the national target. They have not considered if this is safe, or if it will lead to worse patient outcomes, including avoidable patient deaths. They are accepting second rate care for Shropshire people.

There is an overwhelming risk of future deterioration in ambulance response times. Figures obtained by ‘Shropshire Defend Our NHS’ in response to a Freedom of Information request show that it takes an average of 15 minutes longer for a Shropshire patient to be taken to the Princess Royal Hospital in Telford rather than the Royal Shrewsbury Hospital3. If the Future Fit NHS redesign leads, as expected, to a single Emergency Centre in Telford, the pressure on the ambulance service will be significant. This would mean a typical 15 minutes increase for around 9000 patients each year. Quite apart from the impact on patients, this means fewer ambulances available to respond to calls as the time spent to deal with individual patients is substantially longer. There are no plans under Future Fit to increase investment in the ambulance service. It cannot be a coincidence that the national target is being dropped now.

The plans from Shropshire’s health bosses to opt out of national ambulance targets are unprofessional and unacceptable. It is extraordinary that they haven’t bothered to think through what this means for patients. West Midlands Ambulance Service will still be required to make its overall 8 minutes target – so this just gives them the green light to pull ambulances out of Shropshire’s rural areas to focus on urban areas instead. Why should your life be worth less if you live in the countryside? We need our councillors to take a strong view on this. Are they willing to support worse ambulance services in Shropshire?  Will they really agree to a reduced service that is likely to kill people?

This is in preparation for having one Emergency Centre in Telford. They’re ditching targets now because they know ambulance response times will get much, much worse. It’s surely time for our MPs to stop ignoring what’s happening to the NHS in Shropshire. A single A&E in Telford is a disaster for Shropshire people, just as a single A&E in Shrewsbury would be a disaster for Telford. We need two A&Es and two hospitals.

This entry was posted in Uncategorized. Bookmark the permalink.